My Universe: BTS and Coldplay pose together ahead of their song’s release; Bangtan Boys come up with a special gift for the rock band 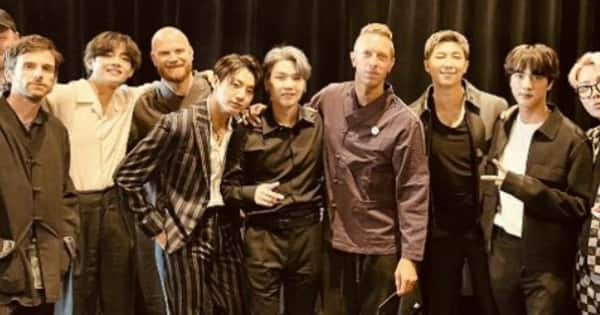 My Universe: BTS and Coldplay pose together ahead of their song’s release; Bangtan Boys come up with a special gift for the rock band

Korean boy band BTS is all charged up for the release of their song My Universe that marks their first collaboration with American Rock Band Coldplay lead by Chris Martin. Fans of both the boy bands are super excited and are desperately waiting for September 24 for it release. Ahead of it, we got a glimpse of all the boys together. On Twitter, the K-pop band shared a picture that has Coldplay and BTS together. Also Read – BTS’ Kim Taehyung captures the imagination of the art world with murals, sculptures and graffiti capturing his angelic looks — read deets

BTS recently zoomed off to New York as they participated in UNGA. Both the bands had a catch up session of sorts and posed for pictures together. BTS also revealed the special gift that they gave to Coldplay members. They handed over modernized Hanboks to the members. Hanbok is a traditional attire of Korea. BTS shared the picture with the caption, “My Universe Crew ! (+Modernized hanbok)” While Coldplay members wore the hanboks gifted by BTS< the K-pop band looked tremendously sexy in formal and semi-formal avatars. Take a look. Also Read – Trending Hollywood news today: ARMY showers love on BTS’ Jimin for secret donation, Sex and the City actor Willie Garson dies at 57 and more

Fans are unable to contain their excitement over these pictures. Also Read – BTS: TXT’s Beomgyu reveals how V once tried to play a prank on him but there was a twist

This NY visit was for sure a historic one
1. BTS first international flight after the pandemic
2. Special Envoy at the UN representative of world’s youth
3. First international performance after pandemic and that too at the UN
4. Megan and Coldplay meet up
HAVE A SAFE FLIGHT ? pic.twitter.com/94poMv8oI8

Are you excited for My Universe? We surely are!