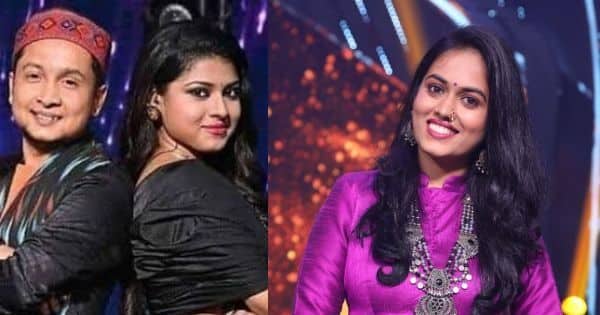 Finally, a beautiful day has ended and we are here with all the important stories that took place in the television industry. From Indian Idol 12’s Pawandeep Rajan and Arunita Kanjilal’s unreleased song going viral to Indian Idol 12’s Sayli Kamble revealing that she is in love, here are the trending TV news of the day. Also Read – Bigg Boss 15: After Mohsin Khan and Tina Datta, Amit Tandon confirms that he is not doing the show

Indian Idol 12 winner Pawandeep Rajan and runner-up Arunita Kanjilal were all set to win the hearts of the audiences with their romantic duet song. But, unfortunately, their soon-to-be-released song got leaked online and #AruDeep fans cannot keep calm. The video takes in a recording studio when we hear the singers crooning to the beautiful romantic song. While, on the other hand, several musicians play various instruments as they add charm to the song. One can also hear Arunita’s magical voice and Pawandeep singing. In an interview with ETimes TV, producer-director Raj Surani told that he is unaware of how the song got leaked and they are checking the source where the song was leaked. Composed by Pawandeep and his fellow contestant Ashish Kulkarni, Raj shares the song has 70 live musicians that include 10 tabla players, 15 dholak players and more. Also Read – Bigg Boss 15: Karan Kundrra, Tejasswi Prakash, Afsana Khan, Pratik Sehajpal – check the complete list of confirmed and probable contestants

Indian Idol 12’s Sayli Kamble reveals she is in love

Indian Idol 12’s second runner-up, Sayli Kamble has been creating a lot of buzz. Apart from singing, Sayli Kamble made noise with her alleged relationship with Nihal Tauro. However, both had denied it. Earlier, in an exclusive interview with us, Sayli Kamble opened up on these rumours. When asked about her love connection with Nihal, she gave a shocking answer. She stated that she shares a brother-sister like bond with Nihal Tauro. Nihal Tauro had given similar answers in his interviews. However, now Sayli Kamble has finally confessed that she is in love. The singer took to her Instagram to share an adorable picture with her boyfriend, Dhawal. Along with the picture she wrote, “Chalo ji aaj saaf saaf kehti hun..itni si baat hai..mujhe tumse pyaar hai..❤️ @dhawal261192” Sayli Kamble is in a relationship with her friend, Dhawal for quite some time now. All her co-contestants from Indian Idol 12, Anjali Gaikwad, Mohd Danish and even Nihal Tauro drop love-filled comments on her post. Also Read – Trending TV News Today: Shehnaaz Gill’s brother gets Sidharth Shukla’s tattoo; Amit Tandon slams Mouni Roy as a fair-weather friend and more

The Kapil Sharma Show will be welcoming pop singing sensation Neha Kakkar, Tony Kakkar along with Indian Idol Top 6 finalists. Yes, you read that right, Indian Idol 12 winner Pawandeep Rajan, Arunita Kanjilal, Sayli Kamble, Mohammad Danish, Nihal Tauro, and Shanmukha Priya will grace the comedy show this Sunday. Sony TV shared a group picture from the upcoming episode and fans are quite excited to enjoy the perfect musical night with these stars. Within no time, fans flooded the comment section as they revealed they are excited to see their favourite singers on the show. ‘Very excited to watch pawandeep performance’, wrote one user, while the other said, ‘Arudeep fans aajo ek baar phir arudeep aarhe hai sony tv p ab ayega maja’. Neha Kakkar also shared a cute video on her Instagram page wherein she was seen grooving to her latest song ‘Kanta Laga’ with Tony Kakkar and comedian Kapil Sharma. Moreover, the singers will play a fun game and leave audiences stunned with their entrancing voices.

The finale of Khatron Ke Khiladi 11 was shot recently in Mumbai and according to reports, the winner is Arjun Bijlani. Photos of Arjun enjoying with his friends are going viral. As you might be aware, the finalists of Khatron Ke Khiladi Season 11 are Arjun, Divyanka Tripathi, Vishal Aditya Singh, Varun Sood, and Rahul Vaidya. Now, reportedly, after the finale, Rahul took to his Instagram and shared a post with the caption, “You must know who is gold and who’s gold plated.” Fans are speculating that he took a dig at the makers as according to him, he was the most deserving contestant to win. In another video, while talking to media persons, he called himself the toughest contestant.

Yeh Rishta Kya Kehlata Hai has been in the news ever since there have been rumours that the lead pair, Mohsin Khan and Shivangi Joshi would be leaving the show in the first week of October. It has also been reported that post their exit, we will see new lead pair in the show who will take the story forward. This news has left fans disappointed as they do not wish to see anyone else except Mohsin and Shivangi in the show. Mohsin Khan and Shivangi Joshi as Kartik and Naira/Sirat have won hearts. They make for a perfect on-screen jodi and have a massive fan following. People are emotionally attached to their characters, Kartik-Naira/Sirat. This news of them leaving the show has been a big shock for many. However, nothing is confirmed yet. Now, in an exclusive interview with FilmDhamaka, Yeh Rishta Kya Kehlata Hai actor Ali Hasan opened up about the rumours of Mohsin Khan and Shivangi Joshi quitting the show. He said, “I have no idea about it for now. There will be a leap in the show but I don’t know Mohsin-Shivangi leaving the show. I hope this does not happen. Now, that you have mentioned this I am a bit worried now. This shouldn’t happen as people are loving their chemistry.”