Raqesh Bapat says those ‘3 magical words’ to Shamita Shetty, watch how she reacted 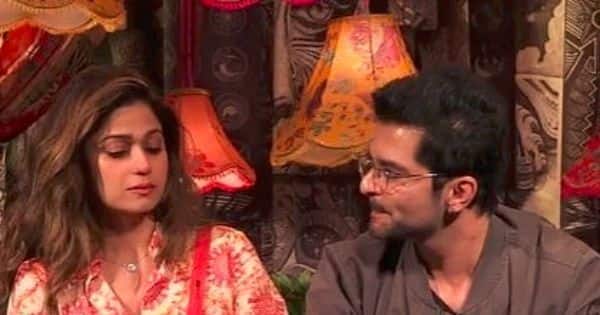 Raqesh Bapat says those ‘3 magical words’ to Shamita Shetty, watch how she reacted

Shamita Shetty and Raqesh Bapat have been in the news right from the time Bigg Boss OTT started. They were each other’s connections and during one Sunday Ka Vaar, they even confessed that they were in a relationship. Now, in a new clip that has emerged online, Raqesh is seen telling her ‘I love you’. Also Read – Bigg Boss OTT: Neha Bhasin reveals she would have dated Pratik Sehajpal if she was not married; says ‘Kha jati isko main’

Shamita asks Raqesh to say a few good things about her. As Raqesh was thinking what to say and was taking some time, Shamita jokingly hit him and said, “You take so long to say something nice?” After a long pause, Raqesh told Shamita, “Je t’aime.” It’s French for I love you. A visibly shocked Shamita then asks Raqesh is even knows what it means and he says that he does. Shamita is left speechless. Have a look at the video below: Also Read – Bigg Boss 15: Mohsin Khan, Tina Dutta, Manav Gohil – 15 Celebs fans may get to see in Salman Khan’s show

Meanwhile, in an exclusive interview with FilmDhamaka, Moose Jattana aka Muskaan Jattana spoke about their bond. Her opinion might not be what the junta feels. She said, “I found Raqesh and Shamita’s relationship quite boring. I feel ye baat karne layak hi nahi hai because ye interesting hi nahi tha. Aur mera koi lena dena nahi hai unse.”

READ ALSO |  After Shehnaaz Gill, makers rope in singer Afsana Khan of Harrdy Sandhu's Titliaan fame for the show and it's CONFIRMED!