Rekha’s school friends mocked her, ‘shaqal dekhi hai aaine mein?’ when she wished to become a star one day 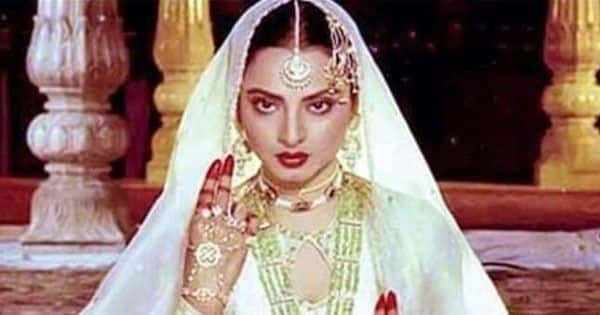 Rekha’s school friends mocked her, ‘shaqal dekhi hai aaine mein?’ when she wished to become a star one day

There are actors, there are stars and then there come the legends who leave a lasting impression on your soul and body with their sheer presence. They tend to trigger all kinds of emotions in you every time they make an appearance. Such is the aura of the legendary actress Rekha who will turn 67 on October 10. She is known for her eternal beauty and one of the finest performers in the history of Indian cinema. From starting her acting career as a child artist in 1966 to inspiring generations over the past decades, Rekha has cemented her place as one of the most respectable and glamourous faces in the industry. And it would surprise you to know that Rekha was mocked by her school friends when she had expressed her wish to become a star one day. Also Read – Did You Know: Aamir Khan never worked with Rekha due to THIS shocking reason?

When Rekha sat down for an intimate chat with Simi Garewal on her show, the actress went on to talk about the kind of impact Saawan Bhadon’s success had on her life. She revealed that it helped her change the mindset of friends who initially believed that she was not good looking enough to become an actress. Also Read – 8 Bollywood DIVAS whose before-after pictures will make you wonder if they opted for fairness treatment

“I was happy as I was getting all the importance and attention. My sisters were very happy too, my mother was very happy. We could buy all the cars and the house. And what’s more, my school friends were really envious because when I would say to them who knows maybe I will be a star tomorrow, and they would say, ‘achha, apni shaqal dekhi hai aaine mein? (Really, have you seen your face in the mirror?)’ and they didn’t know where to look (after my first film was a hit) as they said, ‘Bhanu’s made it after all,'” Rekha told Simi while referring to her birth name Bhanurekha. Also Read – Bigg Boss 15: The mysterious female voice has a special message for Salman Khan; says, ‘Waited 15 years for you, now get ready for a blast’ – watch EXCLUSIVE video

During the candid conversation, Rekha also revealed that she never aspired to become an actress at the age of 13. “No, Never. At that point, all I wanted was to be married and to be loved and to spend the rest of my life with somebody who truly truly truly cared for me and have children. Lots and Lots and lots of children. I wonder why I felt like that then. But that’s what she (Bhanurekha) wanted,” she said.

And now if you look back in time and if anyone would ask you to describe Rekha’s journey in Bollywood, the only word that would come out from anybody’s mouth, would be ‘Fabulous.’