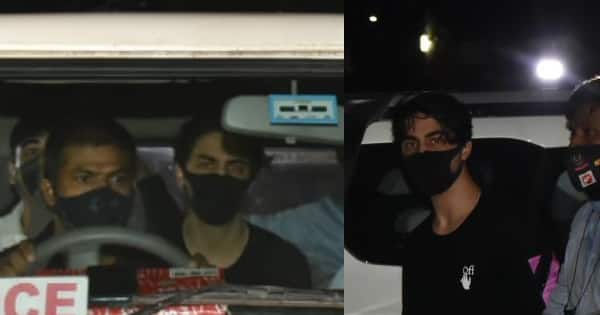 Shah Rukh Khan’s eldest son Aryan Khan along with the other accused in the VVIP drug party case has been sent into 14 days judicial custody. A hearing took place today wherein the Narcotics Control Bureau reportedly asked for an extension in the custody of the star kid and others. However, rejecting NCB’s demand for remand, the court sent them into judicial custody, as per reports. Now, Aryan Khan’s lawyers are expected to apply for bail and the hearing will take place tomorrow. Also Read – Aryan Khan Arrest: Court sends Shah Rukh Khan’s son and others to judicial custody; says NCB cannot get more custody for interrogation

As reported by news agency ANI, the magistrate court is expected to hear Aryan Khan’s bail plea tomorrow at 11 am. The court has order the NCB to file their reply till then. It has also been stated that Aryan Khan has been taken to NCB office even though the court sent him to judicial custody as jail won’t accept inmates at this hour. The star kid is going to be away from home for one more night until the judgement on his bail plea is pronounced. Also Read – Did Shah Rukh Khan hug son Aryan Khan outside the NCB Court? Fake video goes viral

#UPDATE | Party on cruise ship case: The accused will be kept in NCB office in judicial custody till tomorrow because jail would not accept new inmates at this hour

#WATCH | NCB takes actor Shah Rukh Khan’s son Aryan to its office in Mumbai after producing him before Esplanade Magistrate court, which sent him & 7 others to judicial custody for 14-day in a drugs case

Aryan Khan will file a bail petition before the court tomorrow pic.twitter.com/1lG3QcL1U8

Mumbai: Esplanade Magistrate court says it will hear the bail plea of Aryan Khan at 11 am tomorrow; asks NCB to file reply by then

It was on October 3 that he was arrested and sent into NCB custody for a day. His custody was then extended till October 7. Also Read – Aryan Khan asks for bail; lawyer argues, ‘Aryan was not interrogated for two nights, why is custodial interrogation required now?’