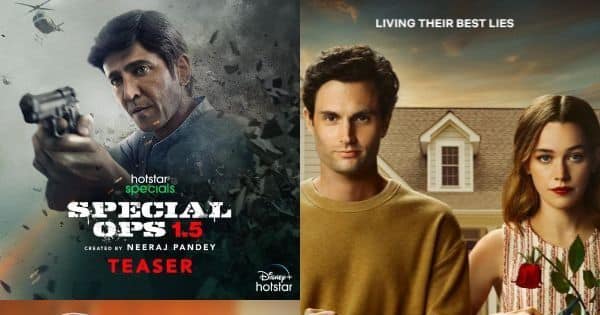 As we shut shop on another day, it’s time to look back at the biggest newsmakers from the OTT space who’ve made it to the trending entertainment news today. From Kay Kay Menon-Neeraj Pandey’s Special Ops 1.5 teaser and MX Player launching Hari Mirch Laal Mirch – Ek Teekhi Ek Karaari to Netflix renewing YOU for season 4 the Home Sweet Home Alone trailer and Squid Game’s new record – here’s all what grabbed headlines to make it to the trending OTT news today… Also Read – Squid Game breaks THIS record made by Bridgerton’s record, will Stranger Things 4 be able to surpass?

So, without further ado, here are the entertainment newsmakers of 14th October 2021:

The dynamics of a marriage – considered to be one of the most pious unions, has been evolving in modern times. However, the customs and expectations of an orthodox family from the hinterlands continue to remain unchanged. Women married into families that are upholders of orthodoxy and a patriarchal value system are often expected to adapt to a more domestic role regardless of their qualifications and professional experiences. This practice has resulted in women across generations losing their individuality. MX Player’s Hari Mirch Laal Mirch – Ek Teekhi Ek Karaari essays a fresh and heartening narrative that strives to touch upon the themes of societal norms, generation gaps and social progress while showcasing the potential of today’s forthright and unintimidated youth who are both emotional and amicable. Starring Kashish Duggal Paul and Aditi Rawat, this show is a family entertainer that captures the unique relationship of a Saas-Bahu duo Pushpi (Kashish Duggal Paul) and Tia (Aditi Rawat). Pushpi – a traditional, conformist, docile woman married into a patriarchal family and molded herself into being a loving mother, and a matriarch who manages her family beautifully. But she leads a dual life all as an incorruptible police officer dreaded by criminals, unknown to her family and constantly endeavors to balance her family/ career.

READ ALSO |  SHOCKING! Farhan Akhtar reveals he gets abuses and requests from Shah Rukh Khan fans – find out why

Netflix renewing YOU for season 4

Yo popular is the psychopathic couple of YOU that even before season 3 could premiere, Netflix has greenlighted YOU season 4. The makers dropped the good news a day before YOU season 3 is set for release on the streaming service giant. Watch the announcement video above…

Several great web series have come and gone, including this year, but few have managed to come close to the euphoria that is Squid Game, so much so that it has now managed to edge past the most anticipated shows of the year, returning after having already built their fanbase.

Read the full story here: Squid Game breaks THIS record made by Bridgerton’s record, will Stranger Things 4 be able to surpass?