The Professor and his gang reaffirm their status as the No. 1 conmen of all time; waiting for the finale is now unbearabl 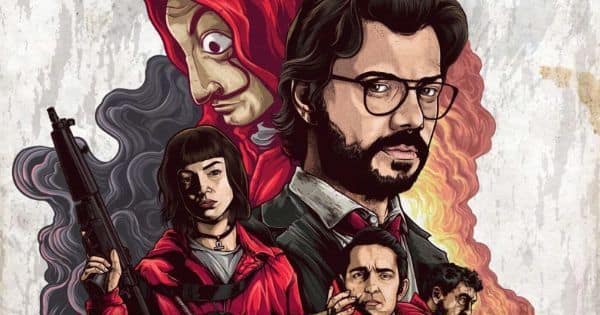 The Professor and his gang reaffirm their status as the No. 1 conmen of all time; waiting for the finale is now unbearabl

Though it’s all about the wrong side of the law, heist movies and shows do give common folk a thrill unlike any other crime story and tap into a desire to be on that side. Anyone who says that they’d never thought of being a part of the team that pulled off daring, edge-of-the-seat heists as we’ve witnessed in classics like Lock Stock and Two Smoking Barrels, Snatch, True Romance, Delhi Belly, Ocean’s Eleven, The Sting, American Hustle, Nine Queens, Special 26, Inside Man, The Italian Job or The Gentlemen is either lying or an actual saint. One of the main reason of this want, this wish to risk the dark side, even more than the money or the thrill, is how these movies are all anti-establishment in nature, sticking it to the system. Also Read – Are Ranbir Kapoor and Ranveer Singh the best choices to play Leonardo DiCaprio and George Clooney’s roles?

Now, truth be told, no heist yarn has dug deeper into this sentiment than Netflix’s Money Heist. (Bella Ciao hasn’t become a global anthem for nothing you know.) So, does Money Heist Part 5 live up to the lofty standards set by its preceding four exceptional seasons or does it succumb to the curse of the final season like so many great shows before it? Well, the answer to that is that it doesn’t drop the bar even an inch. Also Read – BAFTA 2014 winners list: Chiwetel Ejiofor and Cate Blanchett win best actor award!

After the events of season 4, Money Heist 5 begins right from where things left off, with the Professor (Álvaro Morte) trying to outwit Alicia Sierra (Najwa Nimri) after she finds his hideout while Tokyo (Úrsula Corberó), Denver (Jaime Lorente), Rio (Miguel Herrán), Stockholm (Esther Acebo), Helsinki (Darko Perić), Bogota (Hovik Keuchkerian), Palermo (Rodrigo de la Serna) and the rest of the robbers inside the Reserve Bank of Spain are up against it, with their backs to the wall, cornered from all sides, facing perilously unexpected variables, after Lisbon (Itziar Ituño) fools the authorities with the aid of some other of the Professor’s accomplices joins the rest of the team inside the bank.

There’s not a moment’s respite – creator Alex Pina along with his mini-army of directors and co-writers pull out all the stops to shove their master thieves into one tight spot after another till the last episode, when you feel there’s going to be no way out for at least some of them, till the shocking denouement, when you’ll hope against all hope that the worst doesn’t come to pass ( revealing more would lead to major spoilers). Honestly, it’s the only kind of powderkeg, volatile situation that could match up to the mastery of the previous seasons, with the creative team already having displayed their smartest cards of twists and turns, and they pull it off like a bunch of masters in total control of their craft. And the cliffhanger that the aforementioned denouement leaves you at will make it painfully unbearable for the concluding part of the season, which premieres on 3rd December (this part has five episodes).

The addition of some important new cast members via flashbacks, including Berlin (Pedro Alonso)’s son, is also a nice touch. the Of course, those looking for the big, quintessential Money Heist twist won’t be disappointed as the writers do weave in one in the fourth episode. Kind of a moot point to talk about the performances, editing, camerawork, background score, sound effects and VFX since it’s more or less the same players in the picture both behind and in front of the camera, and we’ve all seen what a great job they’ve done till now.

Nothing much to complain about here, except, probably, that the Money Heist 5 takes a bit of time to get going as opposed to the previous seasons, but once it does, there’s no stopping it.

Excluding one minor higgle where Money Heist season 5 takes a bit of time to get going, it’s every bit as thrilling, tense and action-packed as the previous installments, with The Professor, Tokyo and the rest of the world’s greatest thieves backed into their toughest corner yet. There’s only one major twist this time, but I’m guessing the makers are saving the best ones for the concluding part of the season. And be prepared for the finale to leave you shocked and choked, making the wait for the last installment nigh unbearable. Drop everything and binge-watch Money Heist 5 ASAP. I’m going with 4.5 out of 5 stars.