Vanraj to join hands with Rakhi against Anupamaa and Anuj 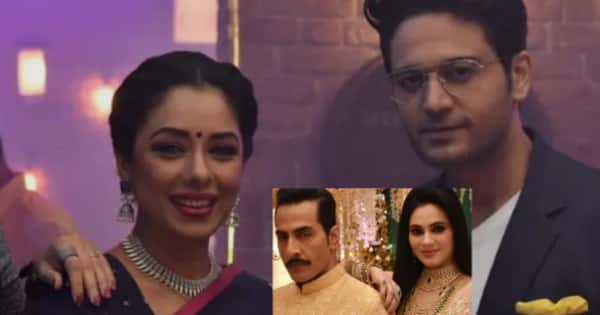 Vanraj to join hands with Rakhi against Anupamaa and Anuj

Rupali Ganguly, Sudhanshu Pandey and Madalsa Sharma starrer TV show Anupamaa have been getting a humungous response after the entry of actor Gaurav Khanna. Gaurav is seen as Anuj Kapadia on the show. Anuj has been in love with Anupamaa for about 26 years now. Now, Anuj did not intend to barge into Anupamaa’s life. He happened to be the rich NRI businessman to whom the Shahs were keen on selling their factory and dance school. Anuj had asked Vanraj and Anupamaa to come up with some business ideas. While Vanraj and Kavya went together, Anupamaa on Kinjal (Nidhi Shah) and Babuji’s insistence too came up with an idea for the business. After much discussion with his legal and core team, Anuj Kapadia not just accepted Anupamaa’s business proposal but also offered her a partnership deal. Irked by the same, Vanraj, Kavya, Baa and Paritosh are belittling Anupamaa and her business idea. Also Read – Anupamaa: Fans add the Kabir Singh BGM to Rupali Ganguly’s badass avatar as she defies Vanraj and it’s LIT — watch video

Gossip mills are churning that Vanraj would take a drastic step to create a hindrance in Anupamaa’s life. He will throw Anupamaa out of the house since she refused to bow down to his demand, that is, to reject Anuj’s partnership proposal. But Anupamaa is not all alone now. She will get help from Anuj again. Anuj aka Gaurav Khanna will offer Rupali Ganguly’s Anupamaa a place to stay. Also Read – Anupamaa SPOILER ALERT: Anupamaa CHALLENGES Vanraj to stop her from working with Anuj Kapadia; ‘ab meri udaan dekhiyega’

And now, as per the latest gossip, Vanraj would be furious with the same. To rub salt on his wounds and add fuel to the fire would be Paritosh’ mother-in-law and Kinjal’s mother, Rakhi Dave aka Tasnim Sheikh. As per the latest serial gossip, Vanraj would join hands with Rakhi. Vanraj wants to make sure that Anuapmaa regrets her decision of joining her hands with Anuj for a business venture. Together, they’ll plan to bring down Anupamaa.

Will Vanraj be successful in ruining Anupamaa’s business with Anuj?