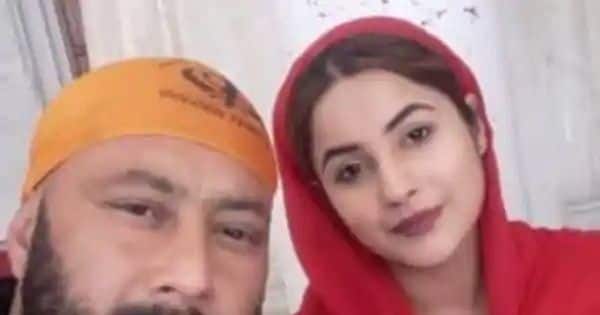 The industry is yet to come to terms with Sidharth Shukla’s untimely demise. The actor died on September 2 due to heart attack. He was 40. Shehnaaz Gill, who was very close to Sidharth, was inconsolable at the actor’s funeral. The actor’s mother Rita Shukla put up a brave front and carried out all the rituals of her late son. SidNaaz fans have been expressing their concern for Shehnaaz and constantly enquiring about her health condition. While Shehnaaz continues to grieve the loss of her close companion, a video of her father Santokh Singh Sukh showing off Shehnaaz’s name being tattooed on his arm is now going viral on the internet. Also Read – RIP Sidharth Shukla: Shehnaaz Gill’s brother and father remember the late actor; ‘Vishwas nahin ho raha’

The video shows Santokh flaunting a huge tattoo of joined hands on his forearm with Shehnaaz’s name in the middle. The video was shared by one of Shehnaaz’s fan pages that keeps updating fans about the actress’ whereabouts and happenings. “He actually did a tatto✨?thats sweet of him❤️plz don’t judge him now for this????? #ShehnaazGill #Shehnaazians,” read the caption. Also Read – RIP Sidharth Shukla: Shehnaaz Gill is broken, devastated, lost… friends from the TV industry share what the actress is going through and it is heartbreaking

For the uninitiated, Shehnaaz was in the news last year when several reports of her father Santokh Singh Sukh being upset with her had surfaced on the internet. It was being said that when Shehnaaz visited Punjab with Sidharth Shukla for a shoot, she refused to meet her fans whom her father made a promise. He had also said that he will never ever talk to her again. Also Read – Sidharth Shukla death: ‘Shehnaaz Gill is not fine, Shebaaz has left for Mumbai’; reveals father Santokh Singh Sukh

READ ALSO |  Do you feel that housemates like Simba Nagpal, Umar Riaz, Ieshaan Sehgaal messed up their chances in this nomination game? Vote Now

However, in April, Santokh had shared a throwback family picture with Shehnaaz on his Instagram that hinted at the end of their alleged cold war. It is known that Shehnaaz is very close to her father Santokh who had also entered the Bigg Boss 13 house to support her. In the said old picture, Shehnaaz was seen posing with her father for a family picture. She is seen wearing an orange suit and looks quite younger in the photograph. It seems like the image was taken when she was a teenager and daddy’s little girl.

Meanwhile, Abhinav Shukla and Rubina Dilaik have given an update on Shehnaaz’s health condition. He said that Shehnaaz is coping well. Abhinav said that he is praying that Shehnaaz and Sidharth’s family get all the strength.