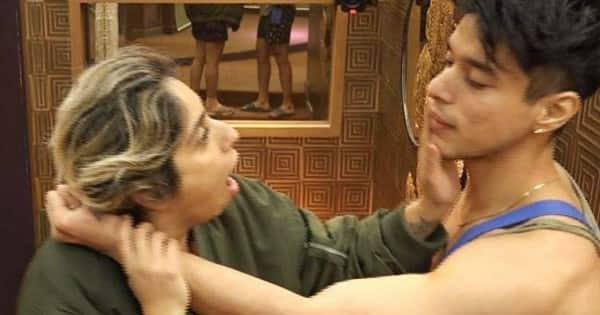 Post Shamita Shetty and Raqesh Bapat, now the Bigg Boss OTT has a new connection that seems to be formed. Neha Bhasin and Pratik Sehajpal’s new budding bond has grown strong with each passing day. Right from flirting with one another to getting cozy, both Pratik and Neha seem to be cupid struck. Pratik was once seen telling Neha that she has a lust for him and not love. Also Read – Bigg Boss OTT: Several fans feel Divya Agarwal should win after Karan Johar declares her a frontrunner – do you agree? VOTE NOW

Take a look at the video – Also Read – Bigg Boss OTT: Netizens shower love on Divya Agarwal after Karan Johar declares she’s the only one to reach the finale solo – view twitter reactions

In the video, Neha and Pratik continue with their goofiness, when the singer tears the latter’s vest. Pratik was seen complaining to Neha for tearing his vest. It seems as Neha and Pratik’s bond has left viewers irritated. One user wrote: “Cute my foot.. sab vulgarity dikha rahi yeh neha yuckkk” while another wrote, “It’s not cute it’s cringe and we stopped watching it”.

Moreover, Neha’s husband reacted to his wife and Pratik’s bond inside the house and said that the two appear to him like a bunch of school kids with their constant fighting, flirting, and hugging. Well, during the Sunday Ka Vaar, Moose got eliminated from the show.