Raqesh Bapat termed ‘sexiest’ by Karan Johar; netizens believe he doesn’t deserve to be on the show 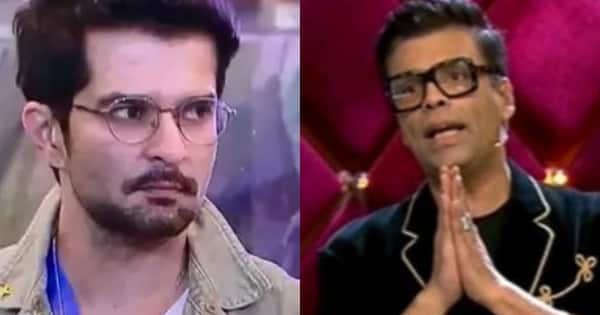 Raqesh Bapat termed ‘sexiest’ by Karan Johar; netizens believe he doesn’t deserve to be on the show

On Sunday’s Weekend Ka Vaar with Karan Johar, it was Raqesh Bapat who received a bashing from the host. It was because of the ‘sexiest’ remark that he made about strength of women as compared to that of men. KJo called out Raqesh on commenting on a woman’s physical capability and said, “We are living in a woke world where you don’t say things like this.” On the other hand, Raqesh tried to defend himself by saying, “I know what strength of a woman is. I have grown-up in a house with women around.” Shamita Shetty also defend Raqesh and stated that he didn’t mean to comment on a woman’s strength but it came out the wrong way. Also Read – Bigg Boss OTT: Several fans feel Divya Agarwal should win after Karan Johar declares her a frontrunner – do you agree? VOTE NOW

Karan Johar then appreciated Moose Jattana for taking a stand against Raqesh’s comment. It was Moose who had told him that strength does not come from gender and she received an applause from the host for the same. Raqesh Bapat then felt a little low and it was Shamita who was by his side. He was also reprimanded for his changing attitude towards Shamita Shetty. Also Read – Trending OTT News Today: Fans peg Divya Agarwal to win Bigg Boss OTT, Akshay Kumar’s Bell Bottom locks its digital release and more

Meanwhile, Moose Jattana got eliminated from the show. Quite a few fans stated that instead of Moose it should have been Raqesh. Also Read – Bigg Boss OTT: Netizens shower love on Divya Agarwal after Karan Johar declares she’s the only one to reach the finale solo – view twitter reactions

Raqesh bapat was being sexist, proved on Sunday ka war

#RaqeshBhapat does not deserve to be in the finale week. #MooseJatana should’ve been here instead of him. #biggbossott

READ ALSO |  Shamita, Raqesh, Pratik, Nishant or Divya – who will win the trophy?