Do you agree with Pratik Shejapal’s sister that he needs to maintain boundaries with Neha Bhasin? Vote now 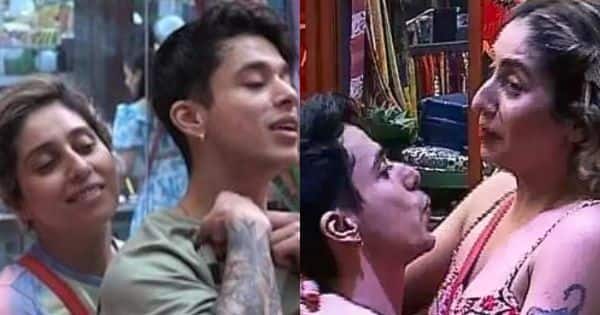 Do you agree with Pratik Shejapal’s sister that he needs to maintain boundaries with Neha Bhasin? Vote now

Bigg Boss OTT is its final week. Very soon we will come to know who is going to be a part of Bigg Boss 15. In yesterday’s episode, we had the contestants’ relatives visiting them. Pratik’s sister Prerna was on the show. She asked him to maintain boundaries with Neha Bhasin. He says that she is his friend but Prerna still insists and tells him that the outside world is watching. Also Read – Bigg Boss OTT: This hilarious video of Raqesh Bapat declaring he is NOT going to have children leaves Shamita Shetty in splits

Neha was Pratik’s connection and gelled really well. They are often seen hugging each other. In a conversation with Nishant Bhat, Neha said that if Pratik and her were of the same age, she would’ve dated him. “Main tujhe kha jaati,” she told Pratik. Pratik was blushing at that moment. Also Read – Bigg Boss OTT, Day 37, September 13, LIVE UPDATES: Neha Bhasin and Pratik Sehajpal have an ‘uneasy’ talk about their relationship

As you might be aware, Neha is married to Sameer Uddin. So we are asking you if you agree with Prerna and that they two need to draw boundaries. Let us know by voting below: Also Read – Bigg Boss OTT grand finale to air THIS Saturday; two contestants among Divya Agarwal, Raqesh Bapat, Pratik Sehajpal, Neha Bhasin, Shamita Shetty and Nishant Bhat to get entry into Bigg Boss 15

READ ALSO |  Is this the jungle-themed house the contestants will stay in this year? Watch EXCLUSIVE VIDEO

Later in yesterday’s episode, Neha and Pratik were unanimous in agreeing that they were feeling uneasy after what Pratik’s sister said earlier in the show.

In a past interview with Spotboye, Sameeruddin said that he had liked Pratik. He felt that their constant squabbling, competing on who is cooler, better, smarter, the hugs, the fights, flirting, teasing and pranking each other was just like a bunch of school kids. He also said that they both could give each other candid perspective, calm each other down, point out when they may be wrong and can have a mature heart-to-heart talk.