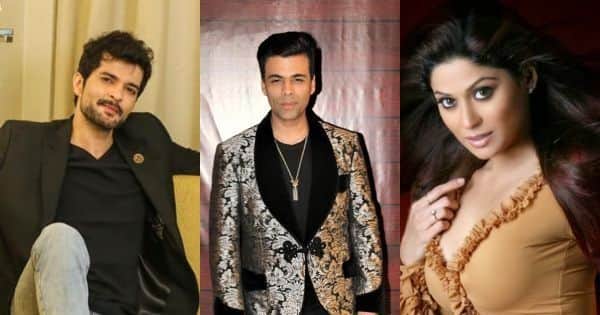 In today’s episode, 12th September, of Bigg Boss OTT, we can expect some major developments, especially with it being the ‘Sunday KA Vaar’ episode, and especially with all that went down yesterday, 11th September, between Neha Bhasin, Shamita Shetty and Raqesh Bapat. Well, on tonight’s ‘Sunday Ka Vaar’ episode, Karan Johar drops a major update on the winner that’ll be declared next week and calls out Raqesh Bapat on his sexism in the last episode while the latter declares that he doesn’t want a relationship with Shamita a short while after she laments the fact that his priorities have changes concerning her and Divya Agarwal. Also Read – Bigg Boss OTT: This hilarious video of Raqesh Bapat declaring he is NOT going to have children leaves Shamita Shetty in splits

READ ALSO |  Not only Raqesh Bapat, Shamita Shetty to get emotional support from this rumoured wild card entry

Karan Johar then tells Raqesh Bapat to go into the room inside and he emerges with a Ganpati hamper, filled with modaks and sweets, which is distributed among everyone. Also Read – Bigg Boss OTT: Pratik Sehajpal’s sister COMMANDS him to stay away from Neha Bhasin; says, ‘har chiz ki ek limit hoti hai’ – watch video

Karan Johar shares an update on the winner, declaring that it’ll be announced next week, and warning all the housemates, except one, that their connections are going to cost them big time.

The only inmate he reserves praise for is Divya Agarwal, announcing that despite what all the others think, only she’s playing the game solo and well, like she’s supposed to.

Raqesh Bapat’s statement, where he said in the last episode that women aren’t as strong as men, became the major focal point of the Bigg Boss, with host Karan Johar mincing no words on calling him out for his obvious “sexism”, refuting all his excuses.

Karan also takes Raqesh to task on why he chose Divya Agarwal for the punishment task despite claiming to support her and considering her a friend, underling how he comes across as a very convenient and confused player.

Karan then inquires how Shanita felt over Raqesh’s words, and she admits that while she didn’t appreciate his statement, he meant it in another way, and also laments the fact that he seems to have completely changed over the past, supporting Divya Agarwal instead of her, and isn’t prioritising her as much as she does him.

Neha Bhasin had once said that she’ll leave the game for Pratik Sehajpal, which a fan doesn’t appreciate and question her about it, to which she apologises and promises not to repeat it.

The other housemates are questioned (9:10 pm)

Karan then questions all the other contestants over their controversial moments over the past week and puts them all on a spot.

Neha Kakkar and Tony Kakkar come on the show to promote their Kaanta Laga song, get Karan Johar to dance with them, name songs and get the contestants to dedicate said songs to others in the Bigg Boss OTT house, and finally, get them to stick forms albeit plastic ones into hairbands fixed on their co-contestants whose words have hurt them.

While Raqesh Bapat and Nishant Bhat were already safe, Karan Johar announces that Shamita Shetty, Divya Agarwal and Pratik Sehajpal have also got enough votes from the audience to go to the finale, which left Neha Basin and Muskaan Jattana in the danger zone and the decision was left to the rest of housemates to choose who gets eliminated. While Shamita, Pratik and Raqesh choose Neha, Muskaan only got Nishant and Divya’s nods, which means she had to leave the house on the threshold of the finale week.

READ ALSO |  Has Pratik Sehajpal walked off to be a part of Salman Khan's Bigg Boss 15? – view tweets