Do you think Shamita Shetty and Vishal Kotian were equally wrong in their ugly fight with Afsana Khan? Vote Now 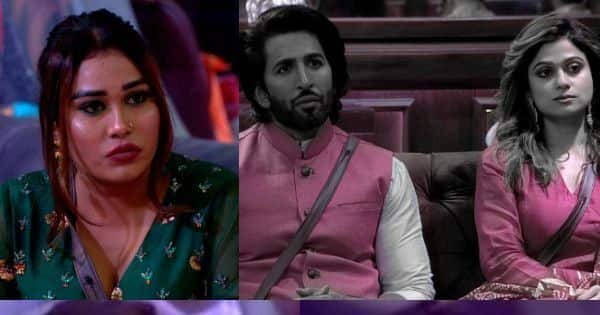 Do you think Shamita Shetty and Vishal Kotian were equally wrong in their ugly fight with Afsana Khan? Vote Now

Bigg Boss 15’s weekend ka vaar was no less than a blockbuster movie. We saw drama, emotions, love and what not. While it looked like Salman Khan is only going to shout at the contestants, we also saw some fun elements towards the end. In the episode, we saw Salman Khan bashing Afsana Khan for her behaviour towards other contestants. He also shared the video with the audience where we saw Afsana Khan abusing and using inappropriate words towards Shamita Shetty and others. The fight began when everyone was sitting in the bedroom and Akasa was trying to make Afsana understand that she was wrong in speaking about her clothes. Afsana did apologise but it didn’t look so. Shamita then called Afsana a lier and fake. Afsana got provoked and began shouting and screaming at Shamita. Also Read – Bigg Boss 15, Weekend Ka Vaar, Twitter Reactions: ‘No one can host better than SALMAN KHAN’ Fans praise the superstar for handling situations well in the house

She called her buddhi and also commented on Shamita’s career. Post that Vishal also jumped in the fight and shouted at Afsana. She called him gay and cursed him. All her friends were trying to explain her that she is going wrong but Afsana didn’t listen. Shamita and Vishal also went on poking and people also tried to stop them but they too did not listen. Afsana’s anger increased and she also started saying extremely dirty things. She started hitting herself and cried. People tried to control her but Afsana was not ready to listen while Shamita and Vishal kept poking her. Post the fight we heard, Pratik saying that even Shamita and Vishal kept poking Afsana but no one says anything to them. Nishant, Donal and Vidhi also agreed with him and felt that Shamita and Vishal also provoked. Hence, we thought of asking fans whether they think that Shamita Shetty and Vishal Kotian were equally wrong in their ugly fight with Afsana Khan. Also Read – Bigg Boss 15, Weekend Ka Vaar, Live Updates: Salman Khan schools Afsana Khan for her abusive behaviour; takes up Jay Bhanushali-Pratik Sehajpal’s topic

READ ALSO |  Neha Bhasin reveals she would have dated Pratik Sehajpal if she was not married; says 'Kha jati isko main'