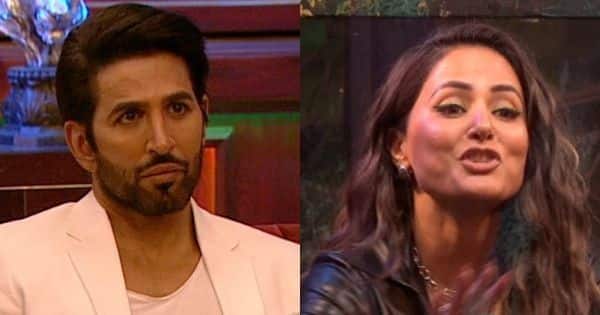 Bigg Boss 15 is getting even more entertaining with each passing day. The show is getting all the love from the audience. Today’s weekend ka vaar episode was quite entertaining. We saw Salman Khan making the contestants realise their mistakes and also having fun. Bigg Boss 11’s finalist, Hina Khan was also a part of the show today. She brought some fun tasks for the contestants through her Boot camp. The first task she played was to teach the contestants cleanliness. She called up Bigg Boss 15’s biscuit boys for the task. Vishal Kotian, Simba Nagpal, Umar Riaz and Ieshaan Sehgaal had to remove their shirts and flaunt their abs. Hina Khan then asked Shamita Shetty to spread the sauces given on the tables kept in the garden area. The boys were asked to wear aprons and clean the table with their abs in a sexy way. Also Read – Bigg Boss 15, Weekend Ka Vaar, Live Updates: Rajiv Adatia is the first wild-card contestant

The first competition was between Umar Riaz and Vishal Kotian. The girls loved Umar’s performance and then they went to change. Meanwhile, they change, Simba and Ieshaan started their cleaning. In the end, Hina Khan asked the girls to name the best performer and they named Umar. While declaring the winner, everyone called out Vishal and Umar and Vishal angrily came out in a towel. When everyone asked why did he enter in towel, he said he has no clothes and had to wash his pants which was dirty because of the sauce task that happen. He said that he doesn’t have clothes and will stay in towel itself. He said he should have been informed about such tasks and he cannot keep spoiling his clothes for a stupid task. Shamita went to make him understand that Hina is a guest and he should not say such things. Vishal said he doesn’t care and he is just saying the truth that he does not have clothes. Hina Khan took the situation gracefully and did not get affected. She also asked the others to calm down as such things keep happening in the house. But Vishal was not ready to listen. Shamita and others also asked him to wear a blue jeans and come out but Vishal wore his shirt and came out with the towel tied. Fans found this rude and have slammed him for his behaviour towards Hina Khan. Also Read – Trending TV News Today: Shaheer Sheikh-Erica Fernandes starrer Kuch Rang Pyaar Ke Aise Bhi 3 to go off-air, Mayank Arora to play Kairav in Yeh Rishta Kya Kehlata Hai and more

I really felt disgusted the way #VishalKotian behaved with Hina! This is the 15 season of #BiggBoss everyone’s know what kind of tasks happens #ManveerGujjar #DeepakThakur #ManuPunjabi and many common people came they also did the show they didn’t have designer cloths too 1/2

I don’t like a lot of people in #BigBoss15 but this #VishalKotian is just sick. He may end up in top 5 but will disappear like Surbhi Rana after that.
In a game you have good and bad players. Then you have this guy. A bad, mean and disrespectful person.

What’s this behaviour of #Vishalkotian?
Seriously he don’t know how to respect towards guest

Awkwardness was visible on #HinaKhan‘s & HM’s face
He has 4 lakh to pay
Earning per weeks in lakh but hadn’t cloth
Stop sympathy game
Not acceptable .#BiggBoss15 #BB15 #WeekendKaWar

READ ALSO |  Neha Bhasin reveals she would have dated Pratik Sehajpal if she was not married; says 'Kha jati isko main'