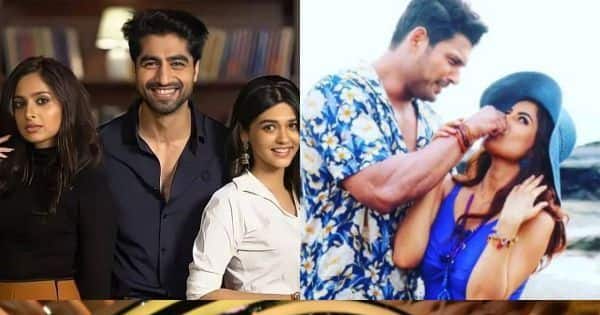 Yay! The weekend is here and it is finally time to sit back and relax. It is also time to go through some interesting news from the television industry that occurred over the last seven days. The past week has been full of important stories and we feel you guys should not miss out on the ones that really mattered. Also Read – Sidharth Shukla and Shehnaaz Gill’s most memorable moments that prove they were each other’s Habit

Yeh Rishta Kya Kehlata Hai will soon see a major change in the story. Mohsin Khan and Shivangi Joshi shot for their last episode and will no longer be a part of the show. New actors will now take the lead and the story will move forward. It was earlier reported that Harshad Chopda, Pranali Rathod and Karishma Sawant will be playing the lead roles. Now, this news has been confirmed. Yes, a new promo of Yeh Rishta Kya Kehlata Hai is out and we see Harshad Chopda as Abhimanyu, Pranali Rathod as Akshara and Karishma Sawant as Aarohi. In the promo, we see Akshara selecting a scarf which is also like by Aarohi. Aarohi tells Akshara that the scarf will look better on her. Akshara agrees and says that it will definitely look better on her sister, Aarohi. Later, the two move to a lakeside where Akshara tells Aarohi that if they throw a coin in this lake whatever they wish for they will get it. Just then, Abhimanyu enters and Aarohi is mesmerised. She snatches the coin from Akshara’s hand and goes to wish. She throws the coin and says that Abhimanyu is really handsome and she wishes that he falls in love with her. While Abhimanyu loves Akshara and wishes that he gets her. Akshara being a good sister wishes that all of Aarohi’s wishes come true. The team of the show also had a puja before starting this new journey. Also Read – Habit – A SidNaaz song: A teary-eyed Shehnaaz Gill BADLY misses Sidharth Shukla as she RECALLS the time they were together

Sidharth Shukla and his rumoured girlfriend Shehnaaz Gill’s unreleased and unfinished music video, has finally been released a day ahead of its schedule, all thanks to SidNaaz fans. And it wouldn’t be wrong to say that the music video titled, Habit – A SidNaaz song, has left each and everyone with moist eyes as much as Sidharth and Shehnaaz fans. The song is a tribute to the memory of the late actor. It features the footages from the last time Sidharth and Shehnaaz shot together earlier this year. The behind the scenes are overlayed by Shehnaaz crooning the song in an open mic. She is often seen getting teary-eyed as she misses Sidharth while recalling the time they were together. Shreya Ghoshal and Arko have composed the music for the song. The original title of the song Habit was rolled back from new title Adhura on the massive demand from SidNaaz fans. Known for his work in shows such as Babul Ka Aangann Chootey Na, Dil Se Dil Tak and Balika Vadhu, Sidharth, who came out as the winner of Bigg Boss 13, died aged 40 after suffering a massive cardiac arrest on September 2. He is survived by his mother Rita Shukla and two sisters. Also Read – Not Adhura, Sidharth Shukla and Shehnaaz Gill’s unreleased music video Habit gets the old name back, thanks to #SidNaaz fans

Bigg Boss 15 had an amazing week. It was full of action, drama and entertainment. We saw new friendships blooming and the old ones breaking. We also saw a lot of violence happening in the house. Vidhi Pandya and Donal Bisht were eliminated mid-week. We also saw the contestants shifted from jungle to house. Bigg Boss 15 will see the entry of two wild cards over the weekend. It seems Raqesh Bapat will be joining Shamita Shetty inside the house. There is another name that is doing the rounds. It is of social media influencer, Rajiv Adatia who is supposed to be very close to Shilpa and Shamita Shetty. He is also known to celebs like Parineeti Chopra, Riddhima Kapoor Sahni, Sonu Nigam and others. He is the rakhi brother of Shamita Shetty. Anusha Dandekar’s name also name forward in the list of Bigg Boss 15’s wild-cards. This had everyone’s interest more so since her ex-boyfriend Karan Kundrra is now shipped with fellow Bigg Boss 15 contestant Tejassvi Prakash, now fondly called TejRan. Fed up of all the rumours and speculations around her entry as wild card, where she will have a face-off with Karan Kundrra and make life miserable for him inside the house, Anusha finally set the record straight with a powerful post on Instagram. In her post on Instagram, Anusha Dandekar had revealed, “I am just trying to live my Best life… Aren’t we all? I have a new skin range dropping so soon for my company that I’m insanely proud of and can’t wait to share with the world. I was in beautiful locations and got to shoot my new campaign there as well (can’t wait for you to see!) The weather was perfect, I tried some of the yummiest food, I danced, I swam, I shopped and woke up to the peaceful ocean and the Burj! The perfect combo for me, a beach baby and a city girl! And I was with two of my best girlfriends.” We also saw a physical fight between Karan Kundrra and Pratik Sehajpal recently. Karan Kundrra did a choke slam move on Pratik Sehajpal nearly throwing him to the ground. Fans of Pratik Sehajpal and many neutrals were aghast after seeing this. Surprisingly, Bigg Boss did not school Karan Kundrra either. After the note task, it is Karan Kundrra and Tejasswi Prakash got entry inside the main house.

READ ALSO |  Did Ieshaan Sehgaal and Meisha Iyer smooch in one corner of the house? — watch video

The television industry’s most-loved actor and handsome hunk Shaheer Sheikh broke millions of hearts when he announced his engagement with Ruchikaa Kapoor. However, Shaheer’s fans were super stoked that he had found “the one” in Ruchikaa. This time last year, Shaheer and Ruchikaa registered themselves as man and wife. And today happens to be their first wedding anniversary. Uh-huh, a year went by already. This anniversary is extra special for Rucheer as they will be celebrating it with their cute little munchkin, baby girl, Anaya. Both Shaheer Sheikh and Ruchikaa Kapoor took to their respective social media handles and shared a snap of moments with each other, wishing and celebrating their one year of togetherness as husband and wife. While Shaheer put a man bowing deep down emoticon in the caption of the selfie he shared with Ruchikaa, the latter penned a few words for the occasion.

Bigg Boss 9 contestant and Om Shanti Om actress Yuvika Chaudhary was arrested by the Haryana Police on Monday for the alleged use of a casteist slur in a video. She had been booked under the SC/ST Act, and was later given interim bail by the Punjab and Haryana High Court. The actress invited the ire of the community five months back when she allegedly used a slur in a vlog. Though she had issued an apology on social media, she was booked on the basis of a complaint filed by a Dalit rights activist, Rajat Kalsan. On Monday, Yuvika Chaudhary was arrested by the Haryana Police and later released on interim bail. The Punjab and Haryana High Court gave orders for the bail. Ashok Bishnoi who is representing the actress, said, “My client has joined the investigation as per the guidelines given by the High Court and she is on interim bail now (in a case of alleged offensive remarks against Scheduled Castes on a social media platform).” She had shot a video with her husband, Prince Narula where he was getting ready. It seems she did not like his get-up and used a slur to describe it. People called her out on social media and some even trended #ArrestYuvikaChoudhary. Later, Yuvika Chaudhary put out an apology on social media. She said that she was unaware of the casteist implications of the word and hence used it.

READ ALSO |  Do you feel that Shamita Shetty is right in being upset with Jay Bhanushali over the prize money? Vote Now

Hina Khan is one of the most popular TV actresses in the entertainment world. She is not just a phenomenal actress but also a kind one. Earlier this year, Hina Khan lost her father. She was devastated by her father’s sudden demise. And when grieving, Hina was tested positive for COVID-19, which added to her woes that she couldn’t even console her mother in these tragic times. However, she had been staying strong and facing everything bravely. In her latest Instagram story, Hina Khan has talked about gaining weight. The actress seems unfazed by the same and has penned an inspiring note talking about her mental health.”Had put on some kilos in these months for obvious reasons and I really did not pay attention to how many kilos I put on. My mental health was way more important and I just wanted to be, wanted to do things that make me happy. Sometimes let yourself be, enjoy the little things, do what you like without thinking much about what people will say or how am I looking. After all, one needs to be in the right frame of mind to do anything in life. And I chose mental health, my well being over my physical appearance. Now here I am, back in action,” (sic) Hina wrote in her story.

Yeh Hai Mohabbatein actress Shireen Mirza is getting married on October 23, 2021 to Hasan Sartaj. The festivities are happening in full swing in Delhi and Jaipur. Shireen Mirza is from Jaipur and the ceremonies will be held in two cities. Divyanka Tripathi flew down a day before to be with Shireen Mirza on her special day. She has shared four videos from the spinster party of Shireen Mirza. We can see that the girls are having a lot of fun. Krishna Mukherjee who played the role of Aliyah on the show is also there. Shireen Mirza is known to TV viewers as Simmi Bhalla, the sister of Raman Bhalla on Yeh Hai Mohabbatein. The actress met Hasan in Delhi and he is a top executive in an IT company. The actress will be shifting to Delhi after her wedding. It seems the actress went on a chaat date with her in-laws after the rishta was fixed. They went to gorge on chaat at Delhi’s famous Lajpat Nagar market. She also said that she ate at Karim’s which is known for its nihari.