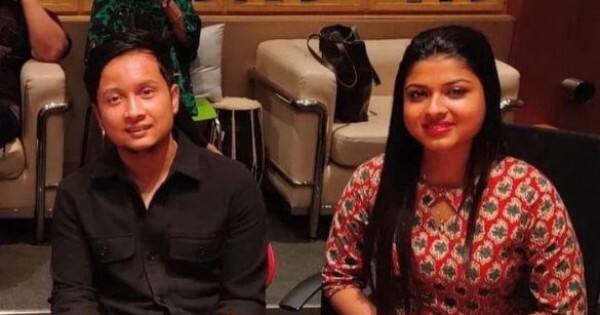 Indian Idol 12 winner Pawandeep Rajan and runner-up Arunita Kanjilal were all set to win the hearts of the audiences with their romantic duet song. But, unfortunately, their soon-to-be-released song got leaked online and #AruDeep fans cannot keep calm. The video takes in a recording studio when we hear the singers crooning to the beautiful romantic song. While, on the other hand, several musicians play various instruments as they add charm to the song. One can also hear Arunita’s magical voice and Pawandeep singing. Also Read – Bade Acche Lagte Hain 2: Pawandeep Rajan-Arunita Kanjilal’s pictures from Nakuul Mehta and Disha Parmar’s show go VIRAL

In an interview with ETimes TV, producer-director Raj Surani told that he is unaware of how the song got leaked and they are checking the source where the song was leaked. Raj Surani said, “We don’t know how it got leaked but that’s fine as a small part of the song has gone out. They are also trying to check who leaked the song online.” Composed by Pawandeep and his fellow contestant Ashish Kulkarni, Raj shares the song has 70 live musicians that include 10 tabla players, 15 dholak players and more. ‘The composer duo Ashish Kulkarni and Pawandeep Rajan are composing this romantic duet with 70 live musicians including 10 tabla players, 15 dholak players and other musicians’. Also Read – Indian Idol 12’s Sayli Kamble CONFESSES she is in love; shares lovey-dovey picture with boyfriend

Indian Idol 12’s favourite couple Arunita and Pawandeep are learning the dance moves and will also be performing on this romantic number at various events. Pawandeep and Arunita have always managed to create a special place in the hearts of the audiences. Their fans have fallen in love with their sizzling hot chemistry and wanted to see them again post the show.

Pawandeep and Arunita gave a sweet surprise to their fans as their danced on Raata Lambiya and Gazab Ka Hai Din songs for Instagram reels. The two released the track ‘O Saiyyonii’ and netizens loved it. Pawandeep also gave a glimpse to all his fans as he introduced the artists he was collaborating with on his social media.