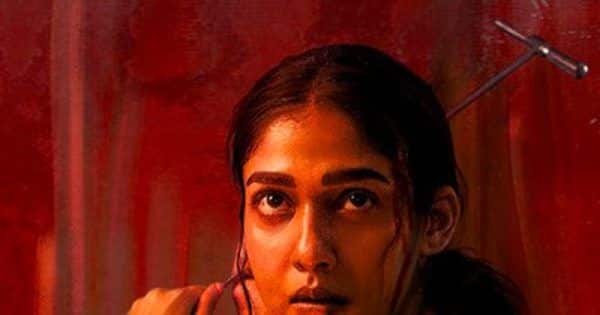 Tamil cinema and dark, gruesome thrillers, touching upon disturbing subjects, do go hand in hand. Vettaiyaadu Vilaiyaadu, Ratsasan, Psycho, Thupparivaalan, Visaranai, are the titles that immediately spring to mind when talking about thrillers that deal with unsettling topic yet never let you breath with the vice grip they engulf you in from start to finish. So, does Nayanthara’s Netrikann, released on Disney+ Hotstar join the league of Kollywood’s crème de la crème of dark thrillers. Well, it just about misses the boat, but that’s also saying a lot given the elite company Milind Rau directorial and Vignesh Shivan production aimed to join. Also Read – Did Shah Rukh Khan just drop a hint of making his OTT debut? Karan Johar and Ranveer Singh fuel speculation

Durga (Nayanthara) has to forgo active duty as a CBI officer after a car accident leaves her visually impaired. However, what she does not forgo is her sense of duty and ability to adapt her handicap with her training, which helps her pursue a ruthless sociopath whom she has a run-in with. Aiding her on her quest are SI Manikandan (Manikandan R. Achari) and food-delivery boy Gautham (Sharan Shakti).

Watch the Netrikann trailer below:

For three quarters of Netrikann, the suspense and mystery is pure edge-of-the-seat stuff, buoyed by terrific performances from the four main players – Nayanthara, Ajmal Ameer, Manikandan R. Achari and Sharan Shakti – with the screenplay and their pitch-perfect all gelling together courtesy Milind Rau’s taut direction. Coming to the technicalities, the thriller maintains the same superlative through its entire duration in terms of Girishh Gopalakrishnan’s unnerving background score and R. D. Rajasekhar’s unassuming camerawork until the point where it needs to transform into haunting imagery, which he aptly pulls off.

When we earlier said three quarters, it’s because Netrikann falters in its final act, after the big reveal occurs just prior to it. Also, the big twist in the big reveal is a bit of a stretch as far as deus ex machinas go. It’s not that what happens in the last quarter pulls the movie way down, it’s just that it ends on a bit of a dampener as opposed to what preceded it. Plus, Lawrence Kishore’s editing needed to have been sharper, way sharper; a film of this kind seriously should have been 2 hours and 26 minutes.

Nayanthara is nigh perfect as a blind woman in Netrikaan and admirably shoulders the movie along with solid support from the rest of the cast. And to it’s credit, if you go easy on the sloppy final act, this Tamil thriller is really suspenseful and mysterious with a dark, disturbing touch. I’m going with 3.5 out of 5 stars.