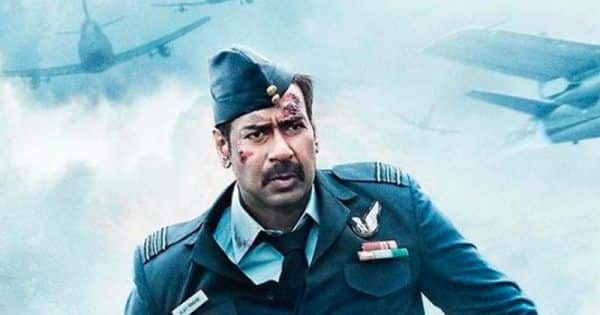 Bhuj: The Pride of India begins by saying that it’s a work of fiction. Speaking about works of fiction, back in 1993, Ajay Devgn had played a solider in one of his most critically panned films and biggest flops to day, Ek Hi Raasta. It now has competition. It wouldn’t be a stretch to unequivocally state that the Ajay Devgn, Sanjay Dutt, Sonakshi Sinha, Sharad Kelkar and Ammy Virk starrer is a clear frontrunner for the worst films of 2021. If you’re willing to brave a sitting through the war movie, then we suggest you read this Bhuj review first and be warned… Also Read – From Hrithik Roshan to Emraan Hashmi: 7 actors over 40 who defied their age with their epic body transformations

Based on a real event during the Indo-Pakistan 1971 war, Bhuj revolves around how IAF squadron leader Vijay Karnik (Ajay Devgn) and 300 village women (led by Sonakshi Sinha) toiled to rebuild the IAF airstrip that was decimated in a surprise attack by forces from across the border, and how it was largely responsible in turning the tide in our country’s favour, thus facilitating the liberation of East Pakistan (now Bangladesh).

Watch the Bhuj: The Pride of Indi trailer below:

Both the VFX and Aseem Bajaj’s cinematography overall are pretty good – expected from an Ajay Devgn production – and they shine the most during the first air battle sequence, which lasts for 15-20 minutes. Sadly, even good VFX and camerawork can’t do much to carry the trite that follows.

First and foremost, the editing of Bhuj the Pride of India is all over the place, so much so that you’re inclined to believe that the makers may have fired editor Dharmendra Sharma before post-production began. Worse still, it looks like only half the movie was completed and the rest was simply patched together with whatever extra scenes the cast and crew may have filmed; that’s how disjoined the entire viewing experience here is. Like, scenes literally jump from pillar to post with no connectivity whatsoever and Ammy Virk seems to be faster than The Flash, given how many different locations you find him at before you can say Jack Robinson.

As for the non-technical aspects…oh, let’s not even get us started about how atrocious the plotting, screenplay and direction are. While I can’t say much about the other names on the sheet that were in charge of these departments, but I had to rub my eyes hard again when I saw Ritesh Shah, the writer of masterpieces like D-Day, Airlift, Madaari, Pink and Raid, among them. Sample this: every low-ranking Pakistani solider is reduced to a whimpering coward and the higher ranked ones appear like maniacal villains straight out of comic books. And the most ridiculous moment comes toward the end when (SPOILER ALERT) Sanjay Dutt literally takes on an entire Pakistan battalion singlehandedly with nothing more than an ax in what looks like something straight out of The Walking Dead or Army of the Dead or World War Z. I know Pakistan was the enemy in 1971 (NOT NOW, WE’RE NOT IN A STATE OF WAR NOW), and the country lost three wars to us, but do their soldiers really need to be reduced to zombies? It actually disrespects the blood, sweat and sacrifice of our soldiers to earn these hard-fought victories.

READ ALSO |  Like a game of Bingo, very few things click and most miss the mark in Blumhouse's first Halloweeen special

Also, is it always necessary to show Paki soldiers speaking in high-pitched tones and mouthing the most unrealistic dialogues and likewise, do our soldiers always have to talk about “sar par kaffan baandhna” or “marna yaa maarna” and all that jazz? Just take a cue from Uri or Lakshya as to how sacrifice and valour can be celebrated without being glorified. After all, death is death, be it on the battlefield or otherwise. Coming to the performances, everybody else who’s not named Ajay Devgn or Sharad Kelkar looks to have thrown caution to the wind and wing it with hilarious results; most of all Sanju Baba, who seems to be having a blast sleepwalking through his entire character’s trajectory (if you could even call it that), and Sonakshi, who channelises her inner Shatrughan Sinha albeit on one of the veteran’s worst days. And what was Nora Fatehi thinking accepting a role that’s not only a cameo, but also one that does nothing for her ambitions on screen other than dancing like Batla House had so wonderfully done?

Intentionally or unintentionally, Bhuj: The Pride of India is so hilarious that it’s destined to go down as a classic ‘it’s so bad that it’s good’ film. Sadly, the unimaginable intrepidity and sacrifice of those involved in this story deserved far, far, far better. I’m going with 1 out of 5 stars.