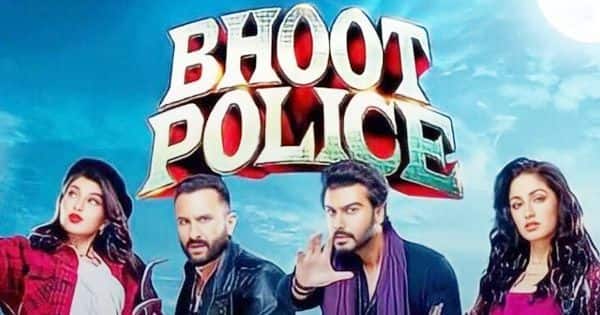 Horror comedies have been around since a long time, but have only recently begun gaining traction in Bollywood. Even in the South, they’ve been quite popular since a while, but it’s taken Bollywood filmmakers and subsequently, its audience, their own sweet time to warm up to the sub-genre. Bollywood did start the ball rolling long before the South with Mehmood and Tanuja’s classic Bhoot Bungla, but for some reason, didn’t revisit the sub-genre till decades later. However, now that the idea has finally found its niche, the Hindi film industry is steadily churning out horror comedies at a regular click, with Go Goa Gone, Stree, Golmaal Again and Bhool Bhulaiyaa bieng the best ones that come to mind.

So does Saif Ali Khan, Arjun Kapoor, Jacqueline Fernandez and Yami Gautam starrer Bhoot Police, directed by Pawan Kripalani join their ranks, or does it end up being merely another attempt at cashing in on something that’s rising on the popularity charts? Well suffice it to say that the intent lies in the former direction and all said and done, Bhoot Police does offer mild doses of both horror and comedy to make for a fairly enjoyable watch.

Vibhooti (Saif Ali Khan) and Chiraunji (Arjun Kapoor) play ghost-hunting brothers, with the former convinced that there’s no such thing as ghost, but their business will always be booming till superstition runs rampant in India, while the latter earnestly believes that they’re continuing their father’s job to genuinely help someone in need one day. Their true test arrives when they arrive at a Dharamshala tea farm owned by two sisters, Kanika (Jacqueline Fernandez) and Maya (Yami Gautam), where an ancient spirit, supposed to have been vanquished by their father, appears to have resurfaced, or has it…?

Watch the Bhoot Police trailer below:

The second half of Bhoot Police really lifts the movie, and it’s a known fact that if you want to make a better half out of the two in a film, always choose the second one as that’s what usually registers in the audience’s mind. That’s not to say the first half isn’t all bad, it has its moments, it’s just that the punchlines land better later on, plus there are more spooks (not scares, those are absent from the entire film) post the midway mark. Of course, balancing both halves admirably is Saif Ali Khan in fine form, with Arjun Kapoor smartly playing off him. Yami Gautam brings a certain stability to a slightly half-baked role while Jacqueline Fernandez still finds it difficult to put in a half-decent performance, but it doesn’t matter because her screen presence is always so vivacious. Among the supporting cast, Jamie Lever manages to leave a mark. A word for the VFX, which is actually very good after ages in a Bollywood movie, plus extra marks for Sachin-Jigar’s background score and Jaya Krishna Gummadi’a cinematography, which together help elevate the entire narrative even during its lackluster moments.

Bhoot Police takes quite some time to get going, and for a major portion, you wonder where it’s actually headed (fortunately, when it finds its footing, most things fall into place). Even after the film picks up, some of the jokes and slapstick moments could’ve been better thought out and the movie could have definitely benefitted from more spooks and chills. Plus, it’s high time our filmmakers and writers thought beyond the tried-and-tested ‘boori aatma’, ‘chudail‘ or ‘ghost out for vengeance’ routines. Forget about other supernatural entities (it seems like an eternity since Gog Goa Gone showcased zombies) or slashers or home invasions, even demons from hell like those in The Conjuring and The Exorcist feel out of our reach. Director Pawan Kripalani and his co-writers, Pooja Ladha Surti and Sumit Batheja do hint at werewolves toward the end (hang around for a Marvel-esque post-credit scene), but why not have made this movie itself about them?

The best part of Bhoot Police is Saif Ali Khan and how he, along with Arjun Kapoor, and the tropes used by Director Pawan Kripalani, make the horror-comedy almost seem like a desi, live version of Scooby Doo. Sure, the jokes and slapstick moments could’ve landed better, especially in the first half, and the entire movie could’ve done with more chills, but there’s an overall spooky vibe and innocuous-fun feel to the proceedings that make it a decent one-time watch, largely helped by some good VFX. I’m going with 3 out of 5 stars.