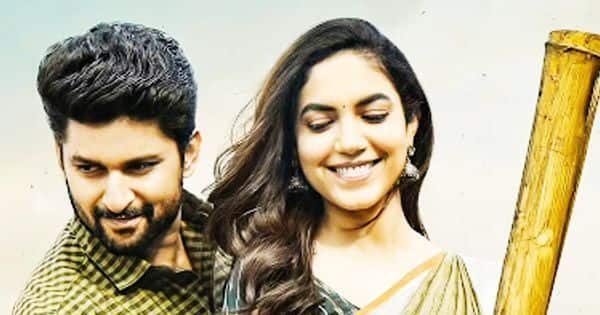 Both Telugu and Tamil cinema have been synonymous with heartfelt family stories set in rural areas. While Bollywood has long since abandoned the village template of family entertainers (no, movies like Gangs of Wasseypur certainly do not qualify), Tollywood and Kollywood continues to pit heroes against villains in rural backdrops, maybe not with the same propensity as before (Chiranjeevi, Rajinikanth and a few other South actors of their time owe a large part of their stardom to such films), but fully aware of the importance of such stories to satisfy diverse demographics. Also Read – Tuck Jagadish trailer: ‘Natural Star’ Nani takes us on an emotional ride with a dose of action in this rural entertainer

The tricky part is reinventing the formula because of the sheer volume that has preceded it. So, does Nani’s Tuck Jagadish – a film long delayed due to the COVID-19 pandemic and multiple theatrical shutdowns – manage to walk that fine line between nostalgic entertainment and reinvention. Well, not quite, but that’s not to say it doesn’t merit a one-time watch at the very least, at least for Natural Star Nani fans. Also Read – Thala Ajith’s Valimai, Rajinikanth’s Annatthe and more: Check out the TOP 5 Tamil films fans are eagerly waiting for – view pics

Our protagonist, Tuck Jagadish (Nani), who derives his name from his obsession of having his shirt / t-shirt tucked in, returns to his ancestral village to find a recurring theme of brothers fighting and even murdering each other for their parents’ property. Things come to a head and Tuck is left with no choice but to change the entire village when his own elder brother, Bose (Jagapathi Babu), ostracises their step-siblings and step mother after their father, Aadisesh Naidu (Nassar)’s demise.

Watch the Tuck Jagadish trailer below:

Tuck Jagadish is a Nani show all the way and credit to him for carrying the movie all the way, especially stroking a fine balance between his star-power and acting dexterity during the formulaic, cliched, repetitive and wafer-thin portions. Ritu Varma has precious little to do, but her mere presence is like a breath of fresh air and the lead pair is well supported by Jagapathi Babu, Daniel Balaji, Aishwarya Rajesh, Parvathi T., Devadarshini, Rohini, Thiruveer, Nassar, Rao Ramesh and Naresh, all of whom are in fine form. It’s not like the performances alone carry the film – Shiva Nirvana’s script and direction does gave its moments, especially in the buildup, metamorphosis of Bose and conflict between Tuck, Bose and Veerendra (Daniel Balaji).

Plus, for a narrative that’s last for more than 2 hours and 20 minutes, and becomes progressively mundane, Prawin Pudi’s editing does manage to keep it afloat. Prasad Murella’s ideally captures the village milieu and S. Thaman’s songs may be a far cry from his best work, but like any experienced hand, he manages to make them fly under the radar without being obtrusive.

While the plot of Tuck Jagadish did hold potential and does flicker with promise till about the halfway stage, it’s the execution that delves into the aforementioned formulaic, cliched, repetitive and wafer-thin path. The conflict, which is well set up as referred to earlier, is resolved in the most unimaginative and haphazard method conceivable. And, the main reason, the masala and larger-than-life moments that fans usually see such movies for are also surprisingly few and far between, and whatever little is there is too underwhelming to strike a chord, with both the action and mass scenes hardly striking a note.

It’s admirable that Nani has tried an out-an-out masala throwback movie to the village-centric Telugu movies of yore, but Tuck Jagadish eventually goes down as a formulaic, cliched masala vehicle that’s surprisingly, even short of enough massy moments, and it’s up to Natural Star Nani to save the day all the way. Thankfully, he’s backed by a good buildup, competent performances from the rest of the cast and a handful of moments that manage to stand out. I’m going with 2.5 out of 5 stars.