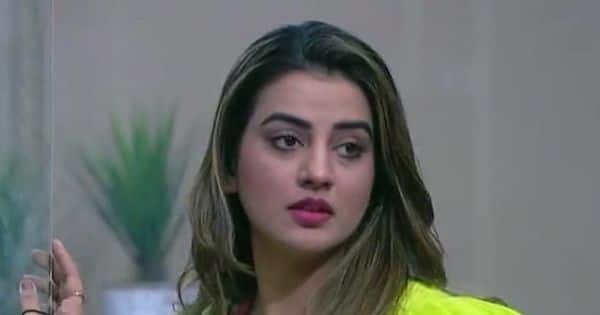 Bhojpuri actress Akshara Singh, who recently got evicted from Bigg Boss OTT house, has opened up about her troubled relationship and the aftermath post the split. She revealed that her ex boyfriend threatened to kill her and tried to destroy her career. At one point, her ex even hired a group of boys who chased her with acid bottles in their hands. Also Read – Bigg Boss OTT: Akshara Singh, Milind Gaba, Zeeshan Khan party with Bigg Boss 9 winner Prince Narula – view pics

“I was getting so many threats that he would kill me or destroy my career but after my father’s conversation with me I gained so much strength that I stopped caring about anything. I did not even fear for my life. I had faced so many thing by then ki maut ka khauff he khatam hogaya tha. I felt kya karoge maroge he na… chalo maar lo. My ex sent few boys with acid bottles in their hand and also tried to destroy my career. I was chased by a few boys with acid bottles in their hand. They were running behind me. People who do drugs on streets, they were sent after me. I just pray to God that no female has to go through what I’ve suffered in my life,” Akshara told TOI adding that she has battled depression. Also Read – Bigg Boss OTT: Do you think Karan Johar’s arguments with Akshara Singh led to her elimination? Vote now

It was unfortunate for Millind and Akshara that by the time they understood the game, the audience had decided on their exit from the Bigg Boss OTT house. This elimination left everyone teary eyed as the most genuine connection had to say goodbye to the house. Keeping the game aside, all the contestants were emotional knowing that one of the sweetest and the most adorable connections of the house will not be there around anymore. Also Read – Bigg Boss OTT: ‘Thoda sharam karo,’ Fans slam makers for Akshara Singh’s elimination – view Twitter reactions