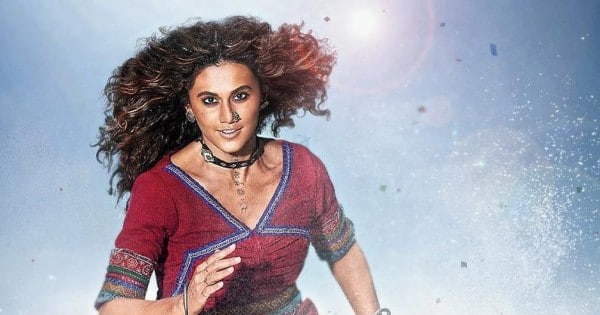 Taapsee Pannu whooshes past the finishing line with a thunderous victory

Taapsee Pannu’s Rashmi Rocket starts streaming on Zee5 October 15 onwards. The film has had a great buzz around it. Right from its promising premise to being in news for all the trolling that the lead star Taapsee, who plays the titular role, was subjected to for her masculine look – Rashmi Rocket has been one of the most awaited OTT releases this year. But in an industry where there have been such amazing sports dramas in the past, does Rashmi Rocket make an impact? Read the review to know…

This ZEE5 Original film tells the story of a small-town girl Rashmi Vira (Taapsee Pannu), who overcomes all societal barriers to become a national-level athlete. But at the peak of her glorious stride, she faces the biggest ever hinderance that can change the course of her life. Rashmi is forced to undergo a gender test, the results of which declare her ‘mardaana’. Her whole world comes crashing down. How can she compete with women when she is not at par with them? How true are her achievements and accolades when she is competing in women’s games, despite not being ‘feminine enough’? But will the baseless, flawed, exploitative rules and laws made by a patriarchal society pull a stop on Rashmi’s sprint to success? Or will she cross this hurdle and whoosh her way to the finishing line in this fight for her identity?

Rashmi Rocket starts slow, taking its sweet time to establish the characters, but picks up gradually and keeps you hooked throughout. While sports dramas have ample scope of getting too dramatic, the story and screenplay in Rashmi Rocket manages to keep things realistic and relatable. As the story takes us through the journey of how Rashmi Vira, just another middle-class young girl from Gujarat turns into a National-level athlete Rashmi Rocket, it helps us strike a relationship with this woman we are seeing on screen. You will loathe her for not realising her potential, you would admire her when she does put her mind, heart and soul to winning every race and feel distressed and devastated whenever she fails, falters or feels sorry for herself and decides to give up.

And there lies the beauty of Rashmi Rocket. It deals with a real problem that is responsible for holding back a lot of sportswomen around the world, with a real character that is as strong as she is vulnerable.

The casting is perfect and while Taapsee Pannu impresses with her strong performance as usual, it is Abhishek Banerjee as the determined lawyer who stands out. While the film’s music doesn’t really leave you humming long after the movie is over, it is not overdone, fitting seamlessly into various situations. The background score is in perfect sync with the emotions playing up on the screen, complementing the storyline.

READ ALSO |  Kunal Kohli's modern version of the Ramayan is visually appealing, but the writing is as jumbled as Raavan's 10 heads

Rashmi Rocket is not just another sports film that is a story of grit of an ambitious individual fighting all odds. It stands out for delving deep into a lesser known, lesser discussed ‘real’ aspect that ails sports and sportswomen around the world. And therefore, deserves all the attention. Also, it’s the Dusshera long weekend and this family drama is just the prefect break from all the overdone, high-octane actioners with the ‘burai pe acchai ki jeet’ over the top theme. We go with three and a half stars out of five for Rashmi Rocket.