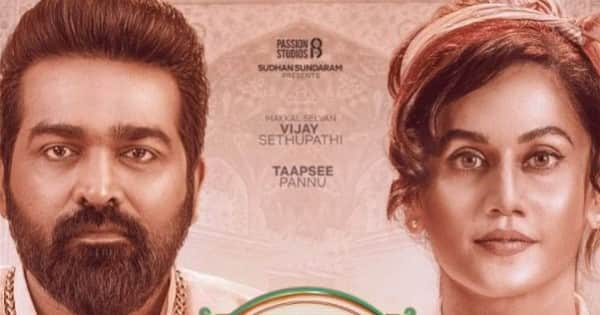 Horror comedy Annabelle Sethupathi starring Vijay Sethupathi and Taapsee Pannu had a great buzz around it when the teaser and trailer were released. However, in an era where there are horror-comedies releasing every now and then, does Annabelle Sethupathi deserve your time and attention? Readout review before you decide. Also Read – Trending OTT News Today: Nia Sharma to enter Bigg Boss OTT, Kota Factory season 2 teaser is relatable AF, Annabelle Sethupathi trailer is entertaining AF and more

Annabelle Sethupathi revolves around Rudra (Taapsee Pannu), who comes from a family of tricksters and somehow lands into a palace that is full of ghosts that are more caricaturish than scary. With time, she realises who she was in her past birth. Interesting, she was a British woman Annabelle and the palace belonged to her. But a local zamindar conquered it by murdering her and her king-husband.

Vijay Sethupathi has done so many impressive roles in the recent past and with Annabelle Sethupathi, he once again prove his versatility. His entry in the film puts the frustrating comedy on a halt for some time and makes the movie a little serious and bearable. Vijay in his role of the King and Annabelle’s husband is calm, composed and probably the only actor in the movie who is pleasant to watch. But yes, if you have watched his other movies, there is nothing note-worthy here. Which brings us to all that’s wrong with the horror-comedy.

The movie is badly directed. Even though the film is 136-minute long, it doesn’t give enough screen time to the array of actors like Jagapathi Babu, Radhika Sarathkumar, George Maryan, Devdarshini, Rajendra Prasad, Subbu Panchu and Vanella Kishore. The makers were perhaps trying to invoke comedy by putting so many characters together but it has only turned out to be a huge mess. Taapsee Pannu and Vijay Sethupathi’s performances are nothing remarkable, especially with all that we have watched them do in their earlier films. Taapsee doesn’t stand out and while Vijay Sethupathi does impress in the film, he has very limited screen time.

The dialogues (in the Hindi version) are a big put down and laced with racist slurs. Shanmugha (the cook in the film) is repeatedly teased for his dark colour, addressed as a ‘junglee bhalu’, ‘black teddy bear’, ‘jale baingan ka bhurta (burnt brinjal)’. It is a big bother that the makers felt that using casteist and racist slurs in the film will evoke laughter.

Anabelle Sethupathi lacks focus, execution, has neither comedy nor horror. It only turns out to be frustrating and unbearable to watch.