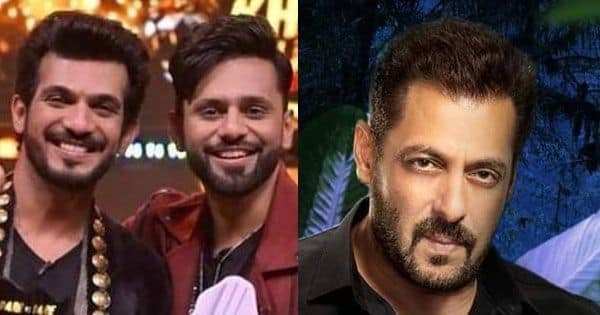 The day we wait for every week is finally here. Yes, it’s Saturday and we know one of the main reasons why you eagerly await this day. Well, we bring to you all the big stories that took place over the past week in the television industry. So if you have missed out on something important this week, then catch up on all those stories here. Also Read – Trending TV News Today: Arjun Bijlani dances with KKK 11 trophy confirming his win, Rashami Desai reacts to Sidharth Shukla’s demise and more

Khatron Ke Khiladi 11 contestants were busy shooting for the finale episode. Host Rohit Shetty along with the finalists Arjun Bijlani, Divyanka Tripathi, Vishal Aditya Singh, Shweta Tiwari, Rahul Vaidya and Varun Sood and other eliminated contestants Nikki Tamboli, Sana Makbul, Aastha Gill, Anushka Sen and Sourabh Raaj Jain were seen gathering in Mumbai for the shoot. Reports say that Arjun Bijlani has won Khatron Ke Khiladi 11. However, there has been no official confirmation about Arjun Bijlani’s win but the pictures and videos from their party prove that he is the winner of the show. In one of the videos, he is seen dancing holding the Khatron Ke Khiladi 11 trophy in his hand. A picture of him holding the trophy during the grand finale has also gone viral. Also, many celebrities have wished Arjun on social media for his win. The finale will take place this weekend. Also Read – Khatron Ke Khiladi 11: Arjun Bijlani kisses and dances with the trophy, proving he has won the reality show – watch video

Bigg Boss OTT ended recently and now we are all waiting for Bigg Boss 15. Salman Khan will soon be seen hosting the controversial reality show Bigg Boss 15, which is all set to air on television from October 2 at 9.30 pm on weekends and 10.30 pm on weekdays. A press conference was held in Nagpur where a few things about the show were revealed. Former Bigg Boss contestants Devoleena Bhattacharjee and Arti Singh took part in the activities at the launch event. During the launch, they introduced the first 5 contestants of the show. We all have already known of Pratik Sehajpal being the first confirmed contestant of the show. Apart from him, Bigg Boss OTT’s Nishant Bhat and Shamita Shetty will also be a part of Bigg Boss 15. Bigg Boss 13 runner-up Asim Riaz’s brother Umar Riaz will also be entering the house this year. TV actress Donal Bisht will also be a part of the show. Also Read – Bigg Boss 15: Will the contestants be living in the jungle or a house this year? Host Salman Khan REVEALS

Shaheer Sheikh and Ruchikaa Kapoor were blessed with a baby girl on September 10. Recently, Shaheer Sheikh took to Instagram to reveal the name of his baby girl. She is named Anaya. Shaheer’s caption read, “Blessed with the gift of life. Filled with immense gratitude… need all your love and good wishes for the journey ahead. Keep us in your prayers.” Anaya is an Arabic originated name and it means care, protection and diligence. It is a variant of the name Inaya. A few days after she was born, an elated Shaheer told Pinkvilla, “I can’t even express it in words honestly. It is something else. I thought I have lived a few years on this planet and have experienced a lot of emotions. But when I held my little one in my arms, I can’t describe it – it was something else.” He added that he had never ever felt anything close to that, and it took almost three days to sink in. He also said that whenever he looks at her, he feels overwhelmed.

The Kapil Sharma Show has once again landed in trouble. Yes, you read that right. An FIR has been filed against Kapil Sharma’s comedy show in the district court of Shivpuri, Madhya Pradesh for allegedly showing actors drinking on the stage while they were performing a courtroom scene. The complainant said that it is disrespectful towards the decorum of the court. The episode in the question was aired in January 2020 and its repeat telecast was shown in April 2021. A lawyer filed an FIR in the CJM Court and the hearing will reportedly take place on October 1, 2021. A report in India Today, quoted the lawyer as, “The Kapil Sharma Show aired on Sony TV is very sloppy. They also make lewd comments on women. In one of the episodes, a court was set up on the stage and the actors were seen drinking alcohol in public. This is contempt of court. That’s why I have demanded registration of FIR against the culprits under Section 356/3 in the court. Such display of sloppiness should be stopped”. This weekend, The Kapil Sharma Show will be welcoming pop singing sensation Neha Kakkar, Tony Kakkar along with Indian Idol Top 6 finalists. Yes, you read that right, Indian Idol 12 winner Pawandeep Rajan, Arunita Kanjilal, Sayli Kamble, Mohammad Danish, Nihal Tauro, and Shanmukha Priya will grace the comedy show this Sunday.

Indian Idol 12’s second runner-up, Sayli Kamble has been creating a lot of buzz. Apart from singing, Sayli Kamble made noise with her alleged relationship with Nihal Tauro. However, both had denied it. Earlier, in an exclusive interview with us, Sayli Kamble opened up on these rumours. When asked about her love connection with Nihal, she gave a shocking answer. She stated that she shares a brother-sister like bond with Nihal Tauro. He had given similar answers in his interviews. However, now Sayli Kamble has finally confessed that she is in love. The singer took to her Instagram to share an adorable picture with her boyfriend, Dhawal. Along with the picture she wrote, “Chalo ji aaj saaf saaf kehti hun..itni si baat hai..mujhe tumse pyaar hai..❤️ @dhawal261192”. Sayli Kamble is in a relationship with her friend, Dhawal for quite some time now. All her co-contestants from Indian Idol 12, Anjali Gaikwad, Mohd Danish and even Nihal Tauro drop love-filled comments on her post.

Indian Idol 12 winner Pawandeep Rajan and runner-up Arunita Kanjilal were all set to win the hearts of the audiences with their romantic duet song. But, unfortunately, their soon-to-be-released song got leaked online and #AruDeep fans cannot keep calm. The video takes in a recording studio when we hear the singers crooning to the beautiful romantic song. While, on the other hand, several musicians play various instruments as they add charm to the song. One can also hear Arunita’s magical voice and Pawandeep singing. In an interview with ETimes TV, producer-director Raj Surani told that he is unaware of how the song got leaked and they are checking the source where the song was leaked. Composed by Pawandeep and his fellow contestant Ashish Kulkarni, Raj shares the song has 70 live musicians that include 10 tabla players, 15 dholak players and more. Pawandeep and Arunita will also been seen in Nakuul Mehta and Disha Parmar’s Bade Acche Lagte Hain 2. Their pictures from the sets have also gone viral on the internet. They will be seen singing at Ram and Priya’s sangeet.