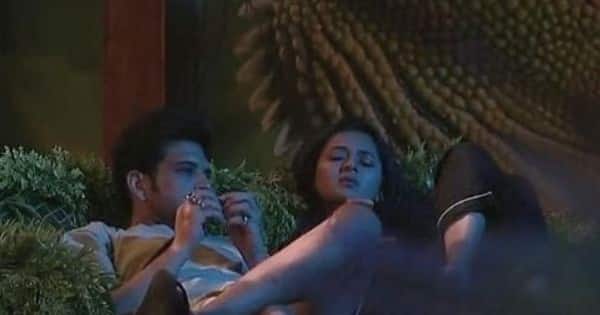 Later, we saw Karan and Tejasswi speaking about their choice of life partners. Tejasswi also told Karan that she feels uneasy when he is not around her. Later Tejasswi said that she wants to be with someone of 35, 40, 45 age. Karan said he wants some of a young age and Tejasswi said that means you need me. They both were seen indirectly flirting. In another promo, we saw Tejasswi getting injured during a task and needed medical attention. Karan picked her up and carried her to the bedroom. Fans are super happy to see this. They can’t stop rooting for #TejRan. Take a look: Also Read – Bigg Boss 15: Vidhi Pandya SLAMS Pratik Sehajpal for instigating Jay Bhanushali during tasks [EXCLUSIVE]

To all the idiots calling them fake, this is the only time I’ll show you a proof. It’s a minuscule moment .. look at his face, he was simply sitting with a neutral face & the second his eyes fell on her, a loving smile bloomed on his face which can never be faked!#Tejran https://t.co/7s7CiniE1q

This hug ???
I don’t think so I’ll be able to get over it any soon!#TejRan #BiggBoss15#KaranKundrra #TejasswiPrakashpic.twitter.com/77027d2vAB

Later when he realised she was pranking he just got a bit upset n then she said tu drr gyi thi na kundri n then that hug…
Awww..
Why so adorable??
❤❤❤#tejRan

READ ALSO |  Do you think Pratik Sehajpal would have won Bigg Boss OTT had he not opted out of the show for Salman Khan's show? Vote Now