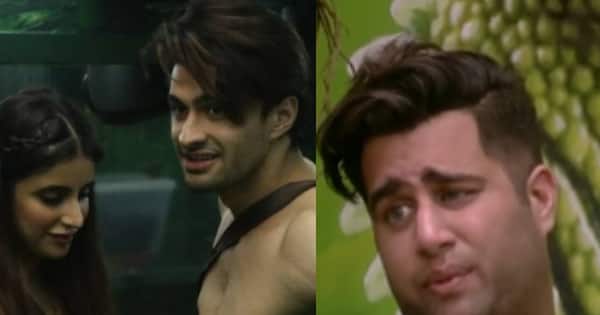 Bigg Boss 15 saw romance as Meisha Iyer and Ieshaan Sehgaal grew close to each other. Within a few days of entering the house, they confessed their love for each other. So much that Ieshaan even went on his knees to propose Meisha. Now, it is wild card contestant Rajiv Adatia who has brought a twist in tale. Supposedly, Ieshaan and Rajiv were in a relationship in the past. Earlier, Ieshaan was also asked by Meisha if he was bisexual. Now, in a recent promo, it is seen that Rajiv is talking to Ieshaan about his connection with Meisha. Also Read – Urfi Javed becomes the butt of all jokes as she makes a bizarre style statement with her quirky ripped jeans – view pics

Rajiv spoke to Ieshaan about how heis seen outside the house. He said, “Tu ek kone mein baitha rehta hai with Miesha [You keep sitting in a corner with Miesha].” He further says that “You look like a puppy behind her, you look like a dog.” While Ieshaan tries to justify saying that Meisha is all alone, Rajiv states that everyone has their own set of problems. The wild card contestant then also mentions that Ieshaan’s family does not approve of his bond with Meisha. He says, “Let me tell you that it’s a big No-No.” Rajiv further mentions that Ieshaan’s motive to get into Bigg Boss 15 house was completely different then what he is doing now. Also Read – Trending TV News Today: Karan Kundrra rushes to Tejasswi Prakash’s aid after task goes wrong, Mohsin Khan’s future plan, Anuj to confront Anupamaa about marriage and more

Will this bring about a change in Ieshaan’s feeling for Meisha? Will we see a change in their game plan? Will there be fights between the love birds? Let’s wait and watch! The game is about to get interesting. Also Read – Bigg Boss 15 promo: Karan Kundrra asks Rajiv Adatia a ‘private question’; latter tells Ieshaan Sehgaal ‘tu jo bahar hai tu andar nahi hai’; more secrets to get revealed