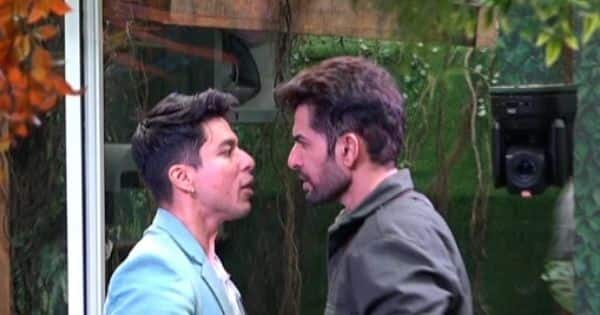 Bigg Boss 15’s day 10 was full of action and we saw so many heated arguments in the house today. The day began with a new task where the ‘Junglewasis’ turn into terrifying daakus. The task was called ‘Daaku Ka Kabza’, which has many challenging layers. If the junglewasis win they will get 30 pieces of the pathway. But if they lose all the pieces they have got until now will also be taken away. They are divided into 5 levels. Shamita, Pratik and Nishant have to kill the junglewasis level by level. Vishal is the head of the daakus and Tejasswi is his wife. Karan and Jay are their right and left hands. The way to kill the daakus is only known by the main house people. Hence, the junglewasis begin to plan things and win the task by keeping the main house people away from each other. Also Read – Bigg Boss 15, Day 10, Live Updates: Jay Bhanushali and Pratik Sehajpal get into a heated argument yet again

Karan and Jay block Nishant and keep Shamita-Pratik away from him. However, Shamita tries to free Nishant but gets hurts. Shamita also gets hurt in the game as Karan and Jay do not leave Nishant. Later Bigg Boss asks the housemates to stop the game as he wants to explain a lot of things regarding the game. During that time Shamita shows Pratik how much she got hurt and is bleeding. Pratik calls the jungleswasis irritating. He tells them they do not know how to play. He goes to the jungle indoor area and shouts at the junglewasis. He looks at Jay and shouts as Jay was near Shamita. Jay tells him he did not hurt Shamita but Pratik goes on fighting. Their argument begins and they shout at each other. Jay abuses Pratik again and uses a bad word during the argument. Pratik gets angry but Shamita and Nishant take him away. Pratik breaks down as he cannot hear bad words about his mother. The housemates also make Jay understand he shouldn’t have given a bad word. Fans also have not liked what Jay said and are ashamed with his behaviour. Take a look at the tweets: Also Read – Bigg Boss 15: From Jay Bhanushali to former contestant Andy Kumar: Here’s who’s saying what about Ieshaan Sehgaal-Miesha Iyer’s love saga

I could nit stop my tears when #Pratik cried @magicaldiarie . Fuck you #JayBhanushali .. dont you have a mother ? @BeingSalmanKhan plz watch episodes before bashing anyone n stop favoring ppl like #JayBhanushali .. #BiggBoss15

As much as I thought #PratikSehajpaI will be irritating contestant in #BiggBoss15 but sorry to say #JayBhanushali you’re the most irritating. You let the world to see ur real personality.??Shame on urself for ur profanity. I don’t think u have the winning quality. #BB15

#BiggBoss15#PratikSehjpal
He’s the strongest guy in the house but is not afraid to show his emotions regarding the things that truly matter to him like his family.?
A True Champ✨#JayBhanushali is a complete package of toxicity and ego. the true villain of today’s episode. pic.twitter.com/ahbcKHkcx5

I just want to slap #JayBhanushali ?

You can criticize #PratikSehajpaI for whatever he has done but In today’s episode he wasn’t wrong. If some is not abusing u, u cannot Abuse them. #JayBhanushali is clear example of twitter pe gyan dena aur ghar mei hug dena. Koi aur hota 2 gali deke muh bandh kr deta#BiggBoss15